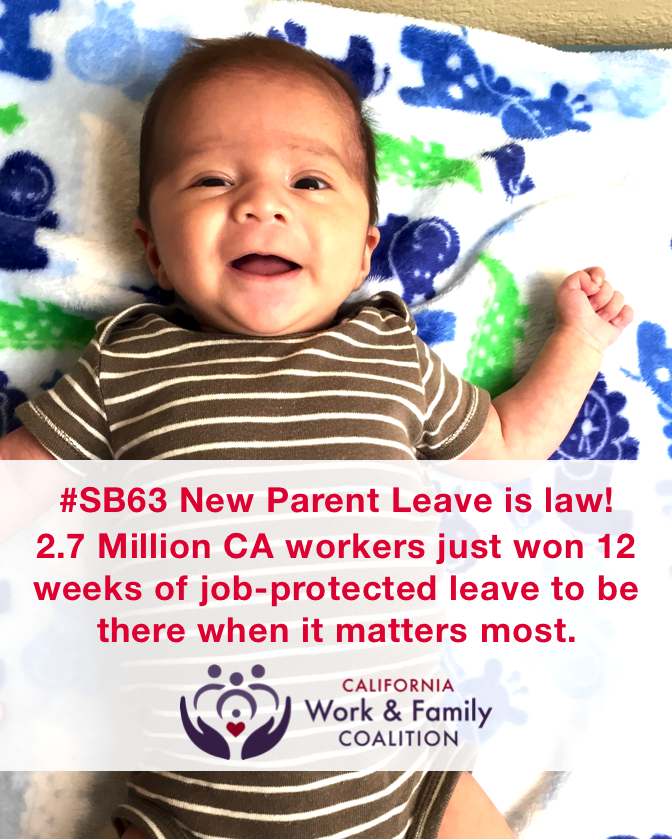 Sacramento, California October 12, 2017: Governor Jerry Brown will sign SB 63 (Jackson) - the New Parent Leave Act  - which will help more California parents take leave to bond with a new child without fear of losing their jobs. SB 63 is part of a package of Legislative Women's Caucus priority bills that the Governor will sign today. It extends 12 weeks of job-protected bonding leave to new parents at employers with at least 20 employees.  The new bill lowers the existing threshold from 50 employees and is similar to a bill the Governor vetoed last year. “We’re thrilled!” said Jenya Cassidy, Director of the California Work & Family Coalition which championed the bill. “This is a huge step toward more equitable leave policies for all California workers. No parent should have to fear losing their job while taking time to bond with a new child.” Coalition member Julia Parish of Legal Aid at Work, said, “Parental leave should not be a luxury for some lucky parents – all children need their parents.  SB 63 ensures that millions more will be able to be there with their children when they are most needed.”

The California Work & Family Coalition led the campaign to pass California’s Paid Family Leave law in 2002. Paid Family Leave provides up to 6 weeks of partial pay to workers who take time off to bond with a new baby or care for a seriously ill family member. Coalition members worked hard to pass SB 63 - organizing district visits, a big lobby day in the Capitol, and trainings to educate parents, caregivers, and lawmakers about the importance of SB 63 job protection when taking Paid Family Leave. SB 63 will provide greater economic security and equity in California’s Paid Family Leave (PFL) by addressing barriers to usage, expanding program eligibility to 2.7 million more workers to bond with a newborn, foster, or adopted child without risking their jobs.

According to Arissa Palmer, Coalition member and Executive Director of BreastfeedLA, “SB 63 will have a positive impact on breastfeeding families.  Research shows women who return to work by six weeks postpartum are three times as likely to stop breastfeeding than women who return later.  Approximately 60 percent of women stop breastfeeding earlier than they would like. One of the key reasons for this is the effort associated with pumping milk. Women with longer leave time can delay pumping, potentially increasing their breastfeeding duration ultimately benefitting the health of both mom and baby.”  SB 63 promotes a strong developmental foundation for newborns, setting them on the path for a lifetime of health and positive growth.

Further, the expansion of job-protected leave also means that more dads can bond with their new babies and step in when mom and other siblings need support.  This was especially meaningful to California father, Danny Contreras, who said, “Parental leave is a priceless investment in our families!  Working Dads can be there more and invest in their families with the passing of SB 63!”